During Stage 1, we read two books Slaughterhouse Five in Humanities and Flatland in Math class. We studied each of the books, Flatland had reading groups and Slaughterhouse Five had individual reading with annotations. Slaughterhouse followed a man named Billy as he time traveled and talked to aliens named the Tralfamadorians. The book had several hidden meanings and motifs, exploring the idea of the 4th dimension being a form of time. Flatland started out explaining the rules of the land, the book was complex in thought and required a lot of explaining. We only studied the first half of the book, which was the rules. It extrapolated on the idea that the 4th dimension was a form of space. The reading groups and discussion questions of each chapter didn’t help me. For me, reading and creating my own conclusions and then sharing that in seminar form helped greatly in understanding Slaughterhouse Five. I understood Flatland entirely, only after we watched the movies. 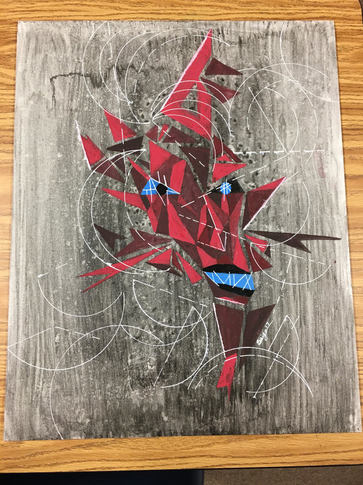 ~Insanity of the Heart, not the Mind~
By: Saige M. Rasmussen
In this piece I wanted to speak about the idea of insanity and how that correlates to a logical mind. Let's start with the background, I used a grey wash and the technique of dabbing my fingertips onto the wet paint to create a static tv effect. The static tv effect is used in horror a lot and makes you feel on edge or lost, also it's the obvious statement of disconnection, or no channel. An insane person or someone that is simply different may feel this type of disconnection. Also if you think about the sound of a static tv it's rather scattered and unsettling, which could be the mind of an insane person. I then used a ruler to create the shattering face, this relates to the logical side, the left brain. The left brain wants to make sense of things, so it measures and simplifies details. As I was thinking about the color scheme, I wanted to create a heavy contrast between the initial face and the eyes and mouth. I identify with the colors red and blue and so I used them for my color scheme. Red usually indicates to the human mind passion, anger, blood, and dominance. I took advantage of this knowledge to create an intense, almost unsettling feeling as a person is looking at the painting. This feeling is emphasized through the eye shape and color contrast. With no pupils and a flip flop of color on the other eye, it's disorienting. The color change creates an intensity and also the fact the eyes are staring right at you. The mouth is colored blue and black to balance the image vertically and I created axis through the shattered face, it's loose but creates balance. I added lines within the blue to again confuse and disorient the person studying the painting. They crawl into the face to create a connection throughout the entirety of the face. After all of the face was painted I went on to changing the whole theme of straight lines. I added curves in the design to add another type of dimension to the painting, it's like the mind is trying to make sense of the face. It's a mind trying to make sense of heated emotion and an unknown “threat”. I am very proud of this painting, I believe that the concept of insanity is expressed through the pure confusion of the painting.

Reading a book in math was an interesting experience. All my life through all the schools I’ve moved to I've never read a book outside of a text book. It hasn't changed my view on math or society that much. I find math necessary and definitive. I think that Flatland was more philosophical in its idea and mathematical in its execution. After reading Flatland and Slaughterhouse Five I immediately drew the connection between an out of world being, or an untouchable, incomprehensible force. This was shown through the Tralfamadorians and the 3rd and 4th dimension in Slaughterhouse Five and Flatland. My understanding of fragility deepened in watching the Flatland movie and reading Slaughterhouse Five. Seeing the damaged psychi of Billy and studying the intricacies of behavior was highly interesting. Then relating Billy’s psychi to A Square’s mind after he was thrown into the 3rd dimension showed just how fragile we are and how our minds can be so broken.


When I was first conceptualizing the idea and processing the parameters of the art piece I wanted to take a humanities based concept and transfer that into a mathematical setting. I took the idea of sanity and insanity. At first I wanted to split a human face in half and use irregular and regular polygons to demonstrate insanity and sanity. After contemplating and seeing that Alan was doing the same idea using irregular and regular polygons. I decided to change the idea to just insanity and being able to extrapolate more.

It didn't change my thinking, only solidified my stance on what the 4th dimension is. The art piece helped me finalize what exactly the concepts are for the aesthetics of the project. It helped me narrow down some concepts for the Meow Wolf look we are trying to get and how we can make it meaningful for the audience. I'm excited to an artist for this project and I would like to be an artistic, aesthetic leader for the project. Can I help plan the aesthetics and help students with their art pieces? 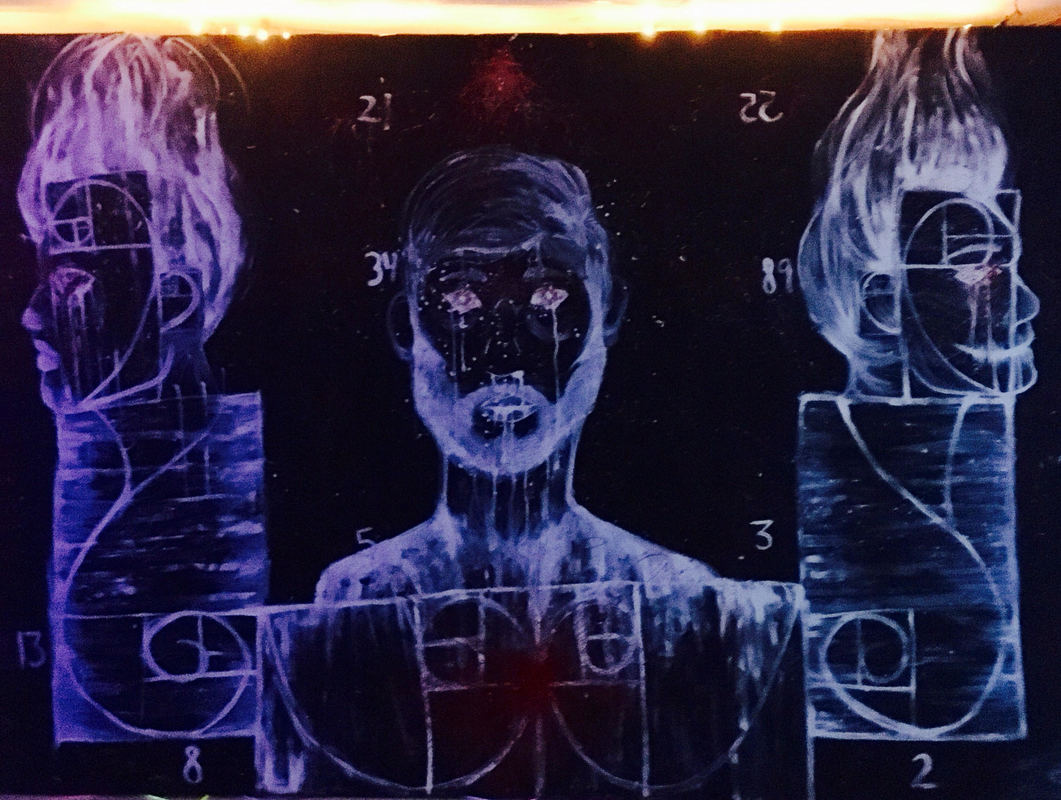 Describe the exhibition that you and your classmates created for this project. What was the final experience like for our audience?

What was your role during this project? What committee(s) were you on? Describe the specific ways that your contributions allowed our art exhibit to happen at All-School Exhibition.

I was assigned to by the Lightning rod(leader and communicator) for the artist group. I contributed by being a large communicator between the other groups. I served as a moderator for ideas so they were accomplishable. I contributed by keeping people in line and also quite literally painting a giant mural for our exhibit.

How did going to Meow Wolf help inform our planning, designing, building, and creation of our own narrative art exhibit?

Meow Wolf allowed us to dream. Animas has a lot of great projects but none as interactive and student driven as this Time and Space Project. I believe that a lot of students knew that and we were skeptical if we could even start this project. Also a lot of students were so worried about money and resources that it left no room for dreaming. Once we went to Meow Wolf I believe that all of those worries were pushed aside and ideas began to bubble and that childlike creation and wonder was back in our systems. Seeing Meow Wolf made us believe in the “impossible”. I like to believe in the Alice in Wonderland idea in which the only way you can accomplish the impossible is to believe it is possible.

After we came back from spring break, we brainstormed narrative backstory ideas, broke off into skill-specific committees to plan our space, and then built our final exhibition. In terms of PAPER and 21st century skills, what did you learn in the last month of this project?

I grew in perspective and advocacy. I grew as a leader and grew in self-confidence. A lot of our PAPER skills came from being in a leadership position. I always wanted to test my leadership ability and I wanted to grow in self confidence. This project really tested my patience and also made me grow more as a person.

This was the largest project of your sophomore year. Did you do your best in this project? How do you know? If not, what will you do differently moving forward, and how do you think that will benefit you?

I put my everything into this project. I created a mural based off of my own experiences and past. My dad raised me on his own and he had a hard time when I really started growing up. I related to those feelings of complete confusion, frustration, and betrayal. I used all of that to craft these characters Marcus and Hannah. I used every bad experience I've had and splashed it onto those boards. I put all that I had into making this project successful because I wanted to prove to everyone my potential as a leader and as a group I wanted to prove that we were more than just kids in a classroom. We are so much more than that and I knew that Animas was conforming. I wanted to show everyone what Animas really was and the potential of each and every class.

Discuss your takeaways from the content of this project. What specific math, Humanities, and soft skills did you develop?

I didn't gather a lot of content from the project, besides learning tessellations, fractals, and some ways about philosophical knowledge. Mostly I've gathered leadership skills has I have explained before.

How did the Time and Space Project change the way you think about project-based learning, Animas, and most importantly, yourself?

To be honest, this project taught me what was wrong with Animas. We had people vandalizing our work and we also had other teachers being skeptical and not believing in us. I'm disappointed in this school. Yes, this school does the best it can with what it has but we are still too focused on grades and traditional learning. It brands itself as a college prep school when in reality it's a life prep school. Many colleges are not progressive like we are here. We do have project based schools for the ARTS but not many in the scientific and mathematical fields. I believe that we need ambition and dedication in this school, which is why I am feeling such sadness with the fact that Aliza is leaving. She is what this school needs. I love project based learning and I hope that Animas can show this world how to be good people. I learned who I was, I learned how to embrace my fire and use it for good. I learned how to open my mouth, I learned how to lead and defend myself. I learned how to hold my own and hold my team. This project made me realize how much potential I actually have.